Paul Arnold, the coordinator of the Church and Media Network (MediaNet), kindly invited me to write a post this week to point to how Wilderness engages with media issues. So here is the result:

When Jeremy Paxman gave his MacTaggart lecture at the 2007 Edinburgh International Television Festival, he actually created his own headlines. After a spate of scandals at the time, he described how his employer, the BBC, had been left with “a catastrophic, collective loss of nerve,” with the bigger question of whether the corporation “itself has a future.” Those comments are even more relevant today, with many seeking to exploit its insecurity. The precariousness is indicated by the fact that big celebrity guns have been marshalled to speak out in its defence.

Looking on as an outsider who is an unashamed BBC-fan, it’s hard to know exactly what to believe. WhenToday at Wimbledon (BBC2’s long-standing nightly review of the day’s tennis) was rebranded asWimbledon2day with Clare Balding et al joined by a cringingly awkward audience, life was imitating art – the Guardian online put up a spot-the-difference quiz between reality and the satirical W1A. If the corporation’s management even remotely resembles Ian Fletcher’s Head of Values (played by Hugh Bonneville), then we should all be worried. Many of us are hoping (and even praying) that the BBC weathers this particular squall with constructive reforms and not mass evisceration.

But Paxman also made a larger point in 2007, which is even more concerning, though hardly exclusive to the BBC.

“It doesn’t take a genius to recognise that what links all the scandals – what is the defining problem of contemporary television – is trust: can you believe what you see on television, does television treat people fairly, is it healthy for society? There’s a real danger now either that we lose trust. Or that in attempting to regain it we retreat into such a mind-numbing literalism that we neutralise the imaginative capacity of the medium.”

It is not just a matter of trusting what we see on television. We all know that images can be faked, falsely juxtaposed, or decontextualised. After all, cinematic digital effects are such that none but the most professionally trained eye can spot the seams. It also touches on what we hear or read (whether on radio or on screens). And this points to a far greater malaise. Who can we trust at all? Everyone, to varying degrees, has a concealed agenda. In the case of the current debate about the BBC, perhaps it is protecting corporate sinecures and familiar management structures, whilst its opponents may just be seeking a self-serving elimination of the competition.

So we must resign ourselves to taking nothing at face value. This is not required simply of investigative journalists – but every consumer of ‘media content’ (a term, if ever there was one,  to make every creative person’s skin crawl). Suspicion is crucial for survival in the modern world. 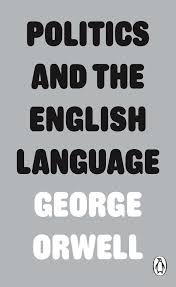 George Orwell pulled no punches in his seminal 1945 essay, “Politics and the English Language.” Much political language of the time was “largely the defence of the indefensible” because it served policies that “are too brutal for most people to face.” This explains the prevalence of “euphemism, question-begging and sheer cloudy vagueness.”

Still, the practice continues apace. We are used to it in military contexts (‘collateral damage’, ‘clean bombing’, or ‘coercive interrogation’). But in other areas of life? ‘Right-sizing’ and ‘relocation’ seem innocuous enough, until they mean redundancy. Which is precisely the point.

“Such phraseology is needed,” Orwell observed, “if one wants to name things without calling up mental pictures of them.” So his unwavering appeal was for straight talking to serve genuine debate, rather than the woolliness that so often masks insincerity. How different things would be if all public speakers (preachers included) insisted on closing what Orwell calls the “gap between one’s real and one’s declared aims.”

But how else can we even begin to regain trust throughout public life (let alone the media)? Would it be such a shock if a documentary-maker (for example) explicitly closed that gap? Would that irreversibly undermine trust in it? Or would it simply be a matter of admitting what we already know? Of course, there are ‘mind-numbingly literal’ ways of doing this (as Paxman put it) – but it could actually provoke a creative mind to some inspiring responses to the problem.

What none of us can avoid, however, is the need to bridge that gap. Otherwise, it won’t just be the BBC that suffers. We all will.

For more on this subject see chapter 2, A Wilderness of Mirrors – Trusting Again in a Cynical World (Zondervan 2015)

Sacred Treasure Change is in the air (in biblical studies): consensus on the dating of the NT is shifting The Jubilee Centre has produced a

Sacred Treasure Glen Scrivener has some trenchant and insightful thoughts about UK church culture here. Too much is uncomfortably accurate. but he gets some helpful