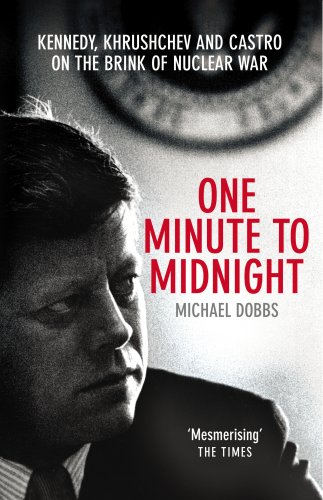 Michael Dobbs‘ account of the Cuban Missile Crisis (he’s not to be confused with the British Michael Dobbs of Francis Urquhart/House of Cards fame) must surely qualify as a definitive account, at least for this generation. Despite the gallons of ink spilled over those fateful 13 days, this recent book (out in 2008) has much to offer and revise. In fact, it makes recent history a thrilling read, despite the pervasive detail, evident research and deep complexity of the events.

Kennedy & Khrushchev on the same side…

Dobbs had unprecedented access to archives and key participants from both the US and Russia – and has even managed to investigate some of the sites and accounts from the Cuban perspective. As a result, he’s been able to ‘triangulate’ every detail, synchronising accounts from each of the perspectives of Moscow, Havana and Washington. He offers a day by day account of the days leading up to what became known as Black Saturday (Saturday 27th October 1962), and then an hour by hour account of the day itself. One of the book’s big themes is the fragility of the peace, even after the two leaders had themselves become determined to find a peaceful solution.

The question the world confronted during what came to be known as the Cuban missile crisis was who controlled history: the men in suits, the men with beards, the men in uniform, or nobody at all? In this drama, Kennedy ended up on the same side as his ideological nemesis, Nikita Khrushchev. Neither man wanted war. They both felt an obligation to future generations to rein in the dark, destructive demons they themselves had helped to unleash. (p340)

This point was poignantly reinforced by Jackie K’s personal letter to the Soviet leader after JFK’s assassination:

From today’s perspective, the key moment of the missile crisis is not the largely mythical “eyeball to eyeball” confrontation of October 24. It turns out that the two great adversaries – Kennedy and Khrushchev – were both looking for a way out. They each had the power to blow up the world, but they were both horrified by the thought of nuclear Armageddon. They were rational, intelligent, decent men separated by an ocean of misunderstanding, fear, and ideological suspicion. Despite everything that divided them, they had a sneaking sympathy for each other, an idea expressed most poignantly by Jackie Kennedy in a private, handwritten letter she sent to Khrushchev following her husband’s assassination:

You and he were adversaries, but you were allied in a determination that the world should not be blown up. The danger which troubled my husband was that war might be started not so much by the big men as by the little ones. While big men know the need for self-control and restraint, little men are sometimes moved more by fear and pride. (p350)

The confusion, and at moments raw panic, of those closest to these events (and who thus understood the potential outcomes), is palpable. Many genuinely feared theywere on the brink of the end of civilisation. Nuclear war seemed inevitable. Reading this book makes it clear how close it came – through no fault of the main protagonists.

One of the interceptor pilots was Lieutenant Leon Schmutz, a twenty-six-year-old recently out of flight school. As he climbed into the skies above the Bering Strait to search for the missing U-2, he wondered what he would do if he ran into the Soviet MiGs. His only means of defense was a nuclear warhead capable of destroying everything within a half-mile radius of the explosion. To use such a weapon was virtually unthinkable, particular over American territory. The detonation of even a small warhead could result in all-out nuclear war. But to fail to respond to an attack by a Soviet fighter went against a pilot’s basic survival instincts. (p264)

What makes this book such a brilliant read is being able to eavesdrop on the 3 groups of protagonists at each and every key moment. We can now know almost exactly what they were thinking (even when their adversaries didn’t – a kind of historical dramatic irony, I suppose). Kennedy had started taping meetings in the Oval office and Cabinet Room (a fact which of course would be Nixon’s undoing). Then there are the reams of documents now released, as well as personal accounts and interviews from those with long memories.

Consequently, various myths get debunked (such as the ‘eyeball to eyeball’ moment alluded to above when Russian ships near the exclusion zone (as depicted in the film Thirteen Days) – the timings don’t quite fit; or the claim that it was Bobby’s idea alone to ignore Khrushchev’s second message on the Saturday). All the individuals appear more human, not less, once the fog of hagiography has been dispersed. But actually, as so often, they all seem more heroic as a result, not less.

Much modern historical writing these days focuses on the little people against the backdrop of big events and big men – the sociological school, if you like. I find that frustrating at one level, especially if it is to the exclusion or detriment of the big picture. However, history is not just about big names. It is about everyone. And this crisis in particular twisted and turned on the actions of the hidden and largely anonymous. Which is why it is so important to hear from some of them, even if their names mean little to the vast majority. Dobbs does this brilliantly. He weaves into the bigger narrative, of Oval Office & Kremlin second-guessing, various quotes (sometimes perhaps too briefly) from some of these:

This is a brilliant book – gripping historywriting at its best. Dobbs draws few lessons explicitly, though notes how George W. Bush’s rhetoric pre-Iraq War 2 drew (erroneously and illegitimately in his view) on Kennedy’s stance during October 1962. However, there’s little need to be too explicit – the book makes its point simply be recounting in some detail what happened hour-by-hour. As such, it is a salutary reminder of how close we came to destruction – and a warning of how even closer we may still be, now that nuclear proliferation has led to such power lying in the hands of less than cool heads…