There’s really no need to fret about the timing of Easter being the result of the co-option of a pagan Spring festival (as some think is the case). So what, to be honest. And in fact, there is something entirely appropriate about this. Why? Because Spring is an almost magical time of year, when life bursts from the ground in verdant greens and brilliant yellows. Such a relief after the stark and bleak beauty or gloom of winter. Being an urbanite, it’s far too easy to forget the wonder of the seasons. But I’ll never forget how much I missed the seasons during our years 30 miles north of the Equator in Kampala.

Why is it appropriate for Easter. Well – I’ve had Peter’s startling (and oft-overlooked) words from his Pentecost speech rattling around my mind in the last few days:

But God raised him from the dead, freeing him from the agony of death, because it was impossible for death to keep its hold on him. (Acts 2:24)

There’s a double whammy there. The Resurrection is God’s initiative. He would not let his Holy One see decay (as he says in v27). But notice: the Resurrection is also a force of nature. It was impossible for the source of life to stay dead. Jesus simply had to come back to life.

Which in turn reminded me of an observation made by Hockney in the Conversations with Martin Gayford.

Do you remember Walt Disney’s Fantasia? In the original version, they used Stravinsky’s The Rite of Spring for one section. But they didn’t get what Stravinsky’s music was about – they used dinosaurs trampling about. It struck me that the Disney people had been in southern California for too long. They had forgotten northern Europe and Russia, where you go from winter to everything forcing itself up through the earth. That is the force in Stravinsky: not dinosaurs pushing down, nature coming up! (Gayford, A Bigger Message, p24)

How wonderful tocelebrate the wonder of the Resurrection at just the time of the year when the blossom is bursting and the colours are returning.

He is Risen Indeed! 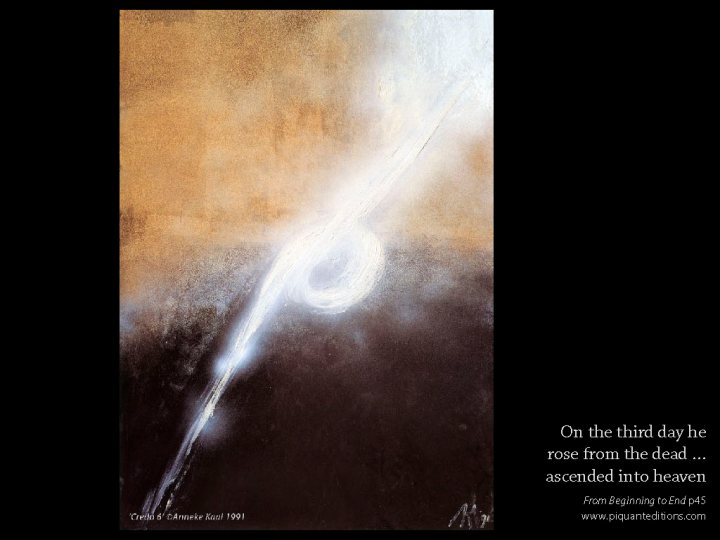 Click on the image to find other wonderful examples of Anneke Kaai’s work.